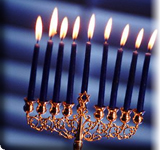 The speech can be used for Shabbat Chanukah or in a class or you can cull from it inspirational thoughts to be used before a public menorah lighting.

The speech begins with a humorous parable about a Rabbi who startles a sleeping congregant so abruptly that the man jumps up and finds himself the only one standing in the entire congregation. This leads into a deep message about our people and how, throughout history, we have stood up, often alone and in the face of seemingly impossible odds.

Next, we see that G-d sends us miracles in three ways.

Abraham Lincoln then narrates a funny tale about a lost traveler who resorted to praying during a terrifying thunderstorm, and his unusual request of G-d. This segues into the philosophy of Jewish history from the point of view of how we mark time.

We see that in American culture, we do it by numbers: the Roaring Twenties, the dot-com '90s. But in Jewish tradition, time is more often marked by people than by numbers. We speak of the generation of Abraham, the generation of the Flood. When we tell the story of Chanukah, we say: “In the days of Mattisyahu.” We don't say “In the year 165 before the Common Era.” Why? And what is the message of all those “begats”, in the Torah? After all, these names could be dispensed with if the Torah counted by numbers.

The answers to these questions become revealed in the unfolding of the miraculous Chanukah story and in the three ways G-d is felt in history. We look at moving examples:

After the destruction of the Temple and the death of many of the Jewish sages, the devastated authors of the Mishnah composed the following somber lament: “Once Rabbi Akiva died, the glory of Torah vanished; when Rebbe died it was the end of humility and fear of sin…” You can feel the devastation of these sages. Their world had shattered and lay in pieces.

But the Talmud does not stop there. Rabbi Yosef unashamedly stood up and disagreed, “Do not teach that humility has ceased with the death of Rebbe, for I am here.” The Lubavitcher Rebbe movingly explains how this is not a contradiction, but actually an uplifting life lesson to every Jew in the darkest of times and across the millennia.

This lesson has reverberated throughout history. We see how the Rabbi of Bluzhov was able to help keep faith alive in an extraordinary event that took place in the Bergen-Belsen concentration camp on Chanukah. Each of us can be inspired like he was by the enduring faith of the Jewish people. Each of us can relive the boldness of the Macabees, who stood up and thus kept the great flame of our people shining brightly to this day.