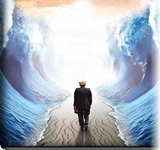 Passover: The Courage to Change

Below is a brief synopsis of Passover: The Courage to Change.

A humorous story of a business lunch meeting during Pesach leads us to ask: Why is the holiday called Pesach? There were many extraordinary miracles that took place during the Exodus. Why is the holiday called Passover and not, say, the "Festival of Splitting Seas?" We will answer the question by taking a profound, funny, and moving look at the idea of redemption. We will then see how the idea of redemption relates not only to our ancient history but also to our everyday lives.

One beautiful insight is provided by examining a stirring story recorded in the Midrash about a king who had heard of Moshe's greatness and wanted to assess the prophet for himself. We will learn why the king's experts reported to him that Moshe was in fact of a selfish, ego-driven nature. We will then see what the king learned when he decided to take the trip to the desert to meet Moshe for himself.  Moshe's response to the king about the real story of his life will help Jews understand how we can all be better.

We'll learn about Professor Nechama Leibowitz, winner of the Israel Prize in Education. Professor Leibowitz made an impact on Israeli society when she was invited to appear on an Israeli radio program. Nechama described a policeman whom she had met many years earlier who had helped wayward teenagers redeem themselves. We'll see how her radio appearance allowed the redemption to continue throughout Israel, helping other children transform and express the Divine image in themselves.

The idea of redemption for children is discussed further with a story about King David. David says something shocking relating to his childhood: "Though my father and mother have rejected me, G-d has taken me in."  What could David possibly mean?  His parents were noble. They did not forsake him and leave him on the streets. And yet we will see that they needed help to see the greatness in the future King when he was still a diamond in the rough.

These stories, and the holiday of Passover itself, reveal a majestic truth.  G-d never abandons us or gives up on us, because He never ceases to believe that we can develop our hidden potential. And it is personal redemption, personal courage to change, that we must keep in mind as we celebrate this holiday. By doing so we can create a link between miracles G-d performed thousands of years ago, and those that can-with courage-happen for us today.