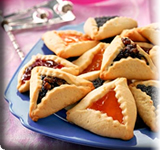 Purim: Generosity Throughout the Generations

This speech opens in the humorous Purim spirit with a funny courtroom drama involving Goldstein and his favorite dog, Moishele. But unlike poor Moishele, who turns out to have an early demise, this comical anecdote leads in to how the Jewish nation noisily celebrates our survival with many L’chaims every year at this special time.

A great 16th century sage then asks an interesting question about this joyous holiday. Why do we give m’shloach manot, gifts of food to friends? We understand the other Purim mitzvot: gifts to the poor, a festive meal, and of course, reading Megillas Esther. All of those practices occur during other festivals as well, but m’shloach manot, food gifts to friends, is unique to Purim. Why does Purim have this unique mitzvah?

In the spirit of Purim, the answer is found when we focus on something deep that we may miss in the midst of celebrating—the Torah’s commandment to love our neighbor. Have you noticed that many people are moved to tears by things that happen to fictional characters in movies and novels?  Yet when the same things happen to people we know—our neighbors—we do not react with anywhere near the same feeling! Your friend tells you, “I am breaking up with my girlfriend.” We say, “Oh no, here we go again…stop Hakn a tshaynik.” But when the same event occurs in the theatre everybody starts weeping! Why is this so?

This question, and the meaning of M’shalach Manot, is answered beautifully by the Ba’al Shem Tov that gets to the heart of Purim’s significance.

The speech then continues to explore this thread by looking at the recent explosion in the m’shloach manot industry.  Online you can send Purim gifts anywhere in the world. There are themes for m’shloach manot arrangements. You name it, it’s out there. There’s even organic, vegan, tofu-based m’shloach manot.  Now that is what I call a victory for Haman!

The speech ends with a famous Israeli novelist who relates the moving story of his father’s dear friend, Zarchi, who saved his father’s emotional and psychological life by going out of his way to carry out a secret good deed.  This sensitivity and caring affected this novelist up until the end of his life, and wasn’t revealed in print until both men passed away. This tale helps us understand what it really means to fulfill the mitzvot of Purim.