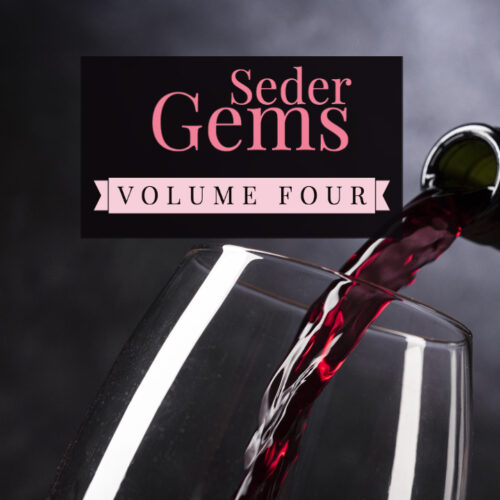 Below is a brief synopsis of Seder Gems - 15 pages of timely ideas that will inspire and motivate your guests.

Four Cups, Four Promises, and Eight Women
Why do we drink four cups of wine at the Seder? Why not three or seven? In 1932, just before Pesach, Rabbi Levi Yitzchok Schneerson sent his son, the future Lubavitcher Rebbe, a letter that highlights how the Sages identify the four cups of wine with the four Matriarchs of Israel. "It was because of the righteous women of that generation," said the Sages, "that our ancestors were redeemed from Egypt." But one might ask: Why was Moses excluded? The answer is deeply moving and demonstrates the pivotal role women have played in Jewish life across the ages.

Ma Nishtana
The Talmud tells a riveting story about Rabbi Yehoshua Ben Chananya. Once while he visited a large city in Rome, he was informed of a young Jewish boy who was taken captive from Jerusalem. Rabbi Yehoshua stood at the entrance to the prison and called out a question.  The boy responded with the correct answer. Upon hearing the boy's response, Rabbi Yehoshua said, "I will not leave here until I ransom the boy!"  The story has an expected ending.  But more importantly, the Talmud is talking not just about a boy in prison but about the destiny of the Jewish people then and now and throws new depth on Ma Nishtana, especially in our times.

V'chol Hamarbeh L'sapeir
Some stories, like bedtime stories, are designed to put us to sleep. Jewish stories are meant to wake us up and to arouse our souls. We tell the riveting story of Anne and her Jewish response to a problem in a troubled country. Every good story has the capacity to expand the moral imagination.

The Story of the Five Sages
Five Sages in the city of B'nai Barak stayed up the entire night recounting the story of the Exodus. Why in B'nei Barak, which is near modern Tel Aviv, and not in the holy city of Jerusalem? The drama of Jewish history, like the story of the Five Sages, often takes place in unexpected places and circumstances. We hear the gripping story of an Israeli Phantom pilot after his plane was shot down over Damascus and learn how he courageously celebrated Passover in defiance of his jailers.

Four Sons Live Inside Each of Us
The Torah speaks of Four Children. In 1953, the Rebbe explained that the four are not merely separate individuals, but also four parts of our own personalities. Sometimes we may be intelligent - like the first son. Sometimes we are rebellious, like the second son. We feel nobility and baseness, kindness and cruelty. The story of Dr. Jekyll and Mr. Hyde illustrates the point well. So how do we as Jews deal with the many different "people" inside each of us? We will explore the answer.

This Teaches That the Israelites Were Distinctive There
What is it about the Jews that makes us stand out?  Natan Sharansky tells the story about his Jewish comrades in the Soviet Union and their mission to save the world.  What became of them and what was the result? And finally, what does it mean to be a great nation?

And You Shall Teach Your Children
The Dubno Maggid told a wonderful story about a man wrapped in luxuriant furs, dripping with jewels. That story should be taught to every Jewish child. It reminds us that learning Torah — and living Torah — gives life genuine meaning and substance. We will come to see that the task of Jewish parents and educators is to emulate the quarterback.

Shefoch Chamatcha
In 1986, the Rebbe explained that the passage in the Haggadah, "Pour out your wrath, Shefoch Chamatcha", is a plea to Hashem not directed against all non-Jewish nations, but only against those who "have devoured Jacob"- that is, those people who destroyed Jewish lives. There is remarkable moral beauty in this passage that many readers miss. By examining the history of this prayer, we will come to understand its beauty.    This all comes together with a funny story about a Jewish tradesman in Russia who outsmarted a group of notorious anti-Semites.

Next Year in Jerusalem
What are we on earth for? Is history merely a series of events whose sum is meaningless? Is there no fundamental moral difference between the history of the human race and the history, say, of ants? Or is there a providential plan of which we are, however humbly, agents?" We will explore the revolutionary answer of Judaism and look at what a leading non-Jewish historian concluded after studying 4000 years of Jewish history.