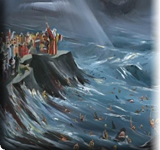 Below is a brief synopsis of Seder Gems - Second Night - 15 pages of timely ideas that will inspire and motivate your guests'.

Hay Lachma Anya
The Passover Seder opens with two invitations: "Let all who are hungry come in and eat," and "Let all those who are in need come in and celebrate Passover." On the surface, the words "hungry" and "in need" are synonymous. A Nobel Laureate saw it differently. His lovely story clarifies the difference.

Shacharit - The Rebel will shine
Rabbi Nachman of Breslov explains that the word Shacharit contains the initial letters of the Four Sons. shin-yod: she'eino yode'a. chet: chacham. resh: rasha.tav: tam. What does this signify? We will explore.

One Evil Child
On the night of Passover, Rabbi Elimelech Shapiro heard a novel pronunciation of the word ‘Echad'. What truth did he learn from this?  We then relate the story of a prominent New York judge who makes a firm decision about his Jewish identity, despite advice against it. His moving story conveys a timely message and touches the heart of every Jew.

Goy Gadol - What Is "A Great Nation"?
What is the difference between a "goy gadol," a "great nation" or "chosen nation," and a "master race"? Superficially the two ideas are similar; however, they are opposites.  We will examine how and look at a lovely story of a rabbi who encountered two boys who had been fighting. The stronger had thrown the weaker into a ditch.  The rabbi explained how the stronger boy could have achieved victory in a better way.  We will come to see how the rabbi was teaching the secret of true greatness.

The King of Egypt Died
"The king of Egypt died and the people of Israel cried out." This is a strange passage. Pharaoh was an evil dictator. His death should have been cause for celebration. Why the weeping? A Russian boy was only five years old when Stalin died, but he learned about life under a dictatorship that explains just why in Egypt the Jews cried and how G-d knew the real reason for their tears.

And G-d Heard Our Cry
What does it mean when we say that "G-d Heard"? Does G-d ever hear a cry for help and ignore it? We know that Job demanded answers from G-d, but His response is not so widely known. Once we understand how G-d answered Job and gave him the strength to carry on, our own doubts and fears will be easier to bear.

The Vision of Pharaoh's Daughter
Pharaoh's daughter was bathing in the Nile when she saw the basket containing baby Moses. Significantly, the text records that "she looked and saw a child crying."  Why did Pharaoh's daughter see and not hear Moshe crying? The answer is beautifully illustrated with a story of Rabbi Chayim of Brisk. His wisdom reveals the depth of his compassion, and teaches us how to extend a hand and assuage the pain of the silent sufferers among us.

Ten Plagues - G-d Hardens Pharaoh's Heart
There is an essential philosophical dilemma that weighs on the Jewish heart throughout the Seder. Is it fair that G-d hardens Pharaoh's heart, makes him do wrong and then punishes him for something he could not help doing? We delve into three fascinating answers.

B'tzeit Yisroel Mi-mitzrayim
In Plato's Republic, there is a tale about a magic ring that gives its wearer the power to become invisible. Would an ordinary person behave morally if he knew that his actions would not be observed by others? Our ancestors, enslaved by Pharaoh, had no such ring. Yet on the night of their exodus, they told us much about their moral stature.

The Sea Saw and Fled
What happened at the Red Sea that made Nachshon ben Aminadav jump? We tell the story of a fire in the middle of the night and a child trapped on the upper floor of his home. We learn what gave him the courage to jump and how every Jewish community needs its Nachshon ben Aminadav.