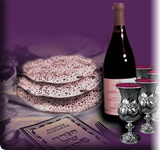 Spice up your Seder and sermons with new insights that will entertain as they inspire. Below is a brief synopsis of Seder Gems.

Tonight we do something no other people in the world do: we commemorate some of the darkest, and must unflattering moments of our past. We relive two hundred years of slavery in Egypt.  We speak of our ancestors who were idol-worshipers. Thanksgiving is celebrated with turkey, stuffing, and sweet potato pie.  The Fourth of July is commemorated with a BBQ and fireworks.  But for Pesach, we celebrate with bitter herbs, the bread of affliction, and salt water. We bring the skeletons out of the Jewish closet.

True, the story has a happy ending. Our ancestors ultimately escaped slavery and found G-d. But the larger question is still worth considering: What sort of people put their most unpleasant and shameful of days at the heart of their identity?

There once was a boy named Al. He was a wild and impetuous child. His questions were endless. Adults were highly critical of young Al. These days, he would be classified as ADD. In his day, his teachers called him “confused.”  But not his mother. In his wildness and impetuosity, she saw potential. In his questions, she saw intelligence. In the decades that followed, Al credited her for all that he went on to accomplish. And he accomplished quite a bit…

בָּרוּךְ הַמָּקוֹם
But Where is G-d?

This name of G-d, Hamakom, literally means “the place,” implying the One who is everywhere. Why is this name of G-d used?  In 1973, Elliot Lasky had just returned from a concert tour with the Rolling Stones, when he found himself having a crisis of faith. Tormented about the existence of G-d, he abandoned Judaism and immersed himself in Zen Buddhism. A friend suggested that he speak with the Lubavitcher Rebbe. Lasky figured he had nothing to lose…

Ben Hecht, the brilliant and legendary Hollywood personality, was a director, producer, novelist, and one of the most successful screenwriters in the history of motion pictures. He was also a passionate defender of Jews in World War II and saved countless European Jews from the Holocaust. When the State of Israel was reborn and under attack, Ben Hecht found himself in the office of a Jewish Hollywood tycoon, as he was seeking to raise money for the fledgling Jewish state. The tycoon totally blew him off. “Listen here Hecht,” he said “I am thoroughly assimilated. I don’t consider myself Jewish.”  Hecht responded...

“Mah nishtanah halailah hazeh?” How have the Jews survived through the millennial night of exile when all the others have faded away?  No nation was ever attacked so often. Empire after empire declared the Jews’ destruction. Yet those empires have vanished into oblivion while the people Israel still lives, defying all the natural laws that govern the history of nations.

The reason the Jewish People are alive today is that we live with the assurance of those words: “In every generation they rise against us and seek our destruction. But the Holy One, blessed be He, saves us from their hands.” A man recounted that he was once on a sightseeing tour of Europe and found himself in Rome at the famous…

…One day, each of us, like Moses, will stand at a crossroads in our life when we will have to choose between personal gain and keeping a promise. There may well be moments when the only way to achieve our dreams requires breaking a promise we had made to someone, or even to ourselves.  The Torah wants us to be inspired by Moses’s example. The foundation of a solid marriage, friendship or business partnership is the trust that people have in each other to live up to the promises they have made. Those enduring commitments define us, by the choice to enter them, and even more, by the continuing effort we exert to keep them.

There are many kinds of promises we make to ourselves: to break a destructive habit, to reconcile with a friend or relative, to become a more attentive spouse, to give more spiritual nourishment to our soul.  But there are other kinds of unspoken promises to ourselves as well. We have each been endowed at birth with splendid potential. There is within us a yearning for idealism, and for nobility, and for G-d. In our youth, we promise to bring these aspirations to life. And yet so often, as the years pass by, we permit these promises to be enslaved to the ‘Pharaohs’ of comfort and laziness…

The answer emerges by way of another question. What is the single greatest obstacle to happiness? Human nature. Human nature is insatiable. We are never completely satisfied with ourselves, our partner, our income, our homes, our children, our jobs, our pleasure. Something in us always longs for more.  Consider the order of a child’s first three words...

The Book of Exodus places great emphasis on the observation of Shabbat. It was the first commandment the Israelites received in the desert. It holds a pivotal place in the Ten Commandments. It is repeated immediately before and after the episode of the Golden Calf. Why is it such a central element in the book of Exodus?

In Leo Tolstoy's novel, War and Peace, the wise commander of the Russian forces, General Kutuzov…

On the East Coast we have the Statue of Liberty. However, it should be supplemented on the West Coast by a Statue of Responsibility. Freedom is always in danger of deteriorating into chaos unless lived with responsibility. Hebrew has two different words for freedom: חוֹפֵשׁ and חֵרוּת. The difference is simple but significant…

Why is the recital of Hallel on the night of Pesach different from the recitation of Hallel during the rest of year?