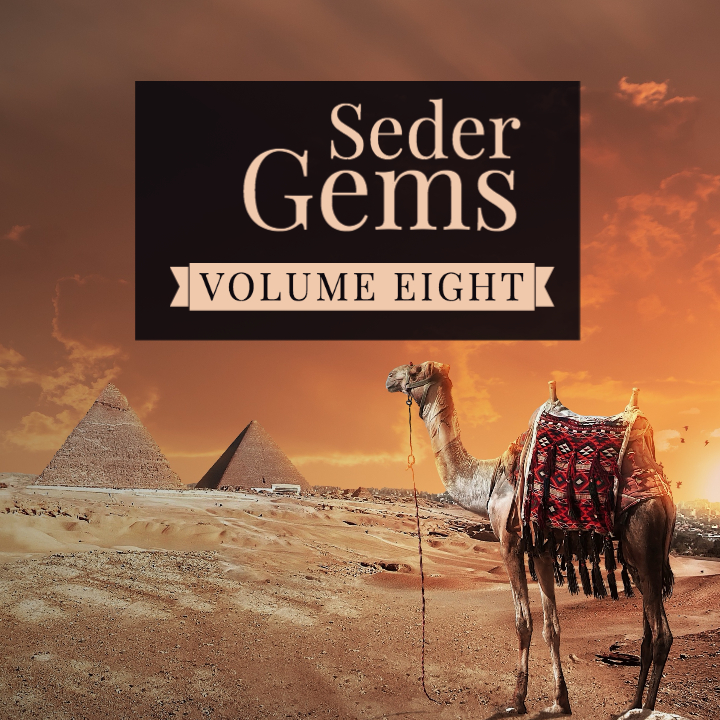 Spice up your Seder and sermons with new insights that will entertain as they inspire. Below is a brief synopsis of Seder Gems Volume Eight.

Binging on Judaism
A new cultural phenomenon has taken hold of millions in America. It’s called “binge-watching” TV. It’s the practice of watching one episode after another of a TV show for hours at a time, without stopping. People disappear into their bedrooms at 8pm and emerge at 7 the next morning with encyclopedic knowledge of “Gilligan's Island”.

Now you may not realize this but binging has an honorable place in Jewish history. As we are famously taught…Albert Schweitzer, the philosopher and Nobel Peace Prize winner put it well… Genuine teaching, like genuine art, demands personal involvement. To communicate Judaism to others, we must live it, breath it, binge on it.

מַגִּיד
The Power of Our Words
To be a free person means to have the ability to express one's thoughts and feelings. Indeed, one of the most poignant expressions of freedom from slavery is the ability to use words, to express what we think and feel. So tonight, when we celebrate our freedom, the key mitzvah at the Seder is to talk, to use words, to tell the Passover story.

Words can be used to hurt and enslave, or to heal and liberate. A word is like a diamond. It may make a life brighter or it may cut and destroy.  The Talmud tells a delightful story that captures this duality….. Reader’s Digest reported a remarkable story about…Pesach, “peh sach,” – “let the mouth speak” reminds us that we are free and because of that we have the power of words, we should remember the blessing they can be, when we speak to our spouse, our children, our loved ones, our colleagues, our neighbors, our friends….

בִּמְתֵי מְעָט
Every Note Counts
The Jewish people are small. We always have been. As we read in the Haggadah, “Few in number….” But each Jew counts. No one is insignificant…At one point during the plagues, Pharaoh attempted to offer a compromise to Moses. Moshe’s answer is not just for Pharaoh. It is an answer for all of us, to remember every single day…One of the greatest orchestra conductors of all time was Arturo Toscanini. He led concerts all over the world and was known as an absolute perfectionist with a phenomenal ear for orchestral detail…

וַיְהִי שָׁם לְגוֹי
Why Birds Fly In A V-formation
Why do birds fly in V formation? Why not an S or Alef or Bet formation? Scientists have found that the V-shaped flight formation allows each bird to receive lift from the wings of the bird in front of it.  A flock of birds has an astonishing 70% greater range than a bird flying alone... The Israel Defense Force is known to be keenly attentive to keeping pace with new technology to maintain its military edge...One Friday afternoon…

וַיָּשִׂימוּ עָלָיו שָׂרֵי מִסִּים
He turned this way and that
Gershon Jacobson was a respected journalist and founder of the Algemeiner Journal.  One day, when meeting with the Lubavitcher Rebbe, the Rebbe said to him, “You're a journalist, so if you'd like, you can interview me.” Since the Rebbe rarely granted interviews, Jacobson immediately asked a loaded question: “One of the things people are asking is why the Rebbe takes on causes that seemingly have nothing to do with Chabad, like a moment of silence in public schools, Israel’s security and durable peace."

In response, the Rebbe said… Skeptics like to say that religion is “the opium of the masses”.  But the truth is the opposite. In our time, opium has become the religion of the masses. Opium desensitizes a person to pain. Judaism sensitizes us to it. To be a Jew…

דְּצַ"ךְ עַדַ"שׁ בְּאַחַ"ב
G-d Who Acts in History
In 1932, Jews in Germany were among the most affluent and successful members of society. In 1933, Hitler came to power. Two years after that, German Jews were no longer citizens, and were forbidden to practice most professions. They were depicted as ugly, subversive strangers. A few years later, they were imprisoned in labor camps and persecuted, then they were murdered.

Strikingly, these phases of persecution were anticipated by Pharaoh — the first recorded Jew-hater in history. Pharaoh started his campaign, the Bible tells us, by manipulating the public image of the Jews, depicting them as strangers plotting a revolt against Egypt. Then they were enslaved and persecuted. A few year later came the murder of the male Israelite babies. G-d punished the Egyptians measure-for-measure. Rabbi Yehudah ingeniously illustrates this by grouping the plagues into threes — דְּצַ"ךְ עַדַ"שׁ בְּאַחַ"ב .  The first of the three groups…

וְנָתַן לָנוּ אֶת הַשַׁבָּת
Looking Sharp
Two strong men once faced off in a wood-chopping contest.  They were tasked with chopping down as many trees in a forest as they could from sun-up to sun-down.  The winner would be rewarded with a small fortune. From morning till noon, both men steadily chopped and chopped.  By noon they were neck and neck, but then one man took a break and stopped chopping.  The other man saw this and thought: “The lazy fellow’s taken a break for lunch. Now is my chance to get ahead of him.” A while later the man got back to work. As the day continued “the lunch breaker” chopped more trees than his hard-working competitor. When sundown came, the man who had taken the break had chopped almost twice as many trees as the other man, who was drenched in sweat and exhausted.

“How did you beat me?” he asked puzzled….

כּוֹרֵךְ
The Sweet Taste of Sin
We have just eaten Matzah and Maror separately. Matzah symbolizes sweet freedom. Maror represents bitter slavery. They have different tastes. They are opposite experiences. Each is eaten alone. Now, however, we combine the two and eat them together in the Hillel sandwich. We eat Korech to emphasize: Even after we have achieved freedom, we remain subject to new forms of enslavement…

נוהגים לפתוח הדלת
Opening the Door
In 1919, a young man named Walt was hired to work at the Kansas City Star newspaper. But things quickly went bad, and he was fired. Why? Because, his editor said, he “lacked creativity and had no good ideas.”
Refusing to let this setback stop him, Walt decided to start his own company…

When Pesach falls on Shabbat
The Anatomy of Peace
Shabbat Shalom means: “a peaceful Shabbat.” There’s a lovely insight in the Talmud regarding peace: It says that one of the names of G-d is Shalom, and the seal of G-d is emet, truth…To have peace and harmony in the home does not require that your spouse and children be perfect. Peace comes about through a dozen daily acts of kindness, thoughtfulness and gratitude. One act at a time, each building on the others, slowly creates harmony…

These and other anecdotes, quips, and stories bring the teachings of Yiddishkeit and Chassidus to life in concise but powerful “mini-sermons” that will keep your Seder alive and memorable.