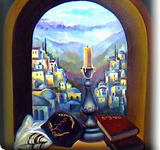 18 pages of insights into the beauty, power and meaning of the prayers.

These Shabbat Gems are filled with new, inspiring material that explain and elucidate many of the prayers we say on Shabbat. They are intended to both entertain and educate the audience between prayers. They are rich with Jewish wisdom, wit and joy, and will help bring greater meaning to both committed Jews and casual congregants. Below is a synopsis of the Gems.

Tefila L'Moshe: The Bank Account of Life (p.186)
We live through time, this Psalm reminds us, but we are not always conscious of how precious and irreplaceable it is. The greatest difference between time and space is that we can return to a place but we can never return to a moment in time. We do a powerful thought experiment to discover if we've been investing time wisely, or merely spending it. Life's too full of blessings to waste attention on artificial substitutes. Live graciously, celebrate your Jewishness and enhance other people's lives. Each day is a gift from G-d, make a blessing over it and turn it into a blessing for others.

Prayer and the Self-Made Man (p.187)
So you think that you are your own boss?  Benjamin Disraeli had a succinct quip describing an arrogant British aristocrat who subscribed to this idea. Disraeli said of him: "He is a self-made man, very much in love with his creator." The main theme of this beautiful Psalm is that we need to make ourselves aware of our dependence on G-d's blessings for our success. Why do so many people find it hard to pray in our modern age? How do we overcome the illusion of self sufficiency?  We explore the answers and see why prayer is one of the most powerful sources of energy for human effort.

G-d is Your Shadow (p.188)
We look at the Baal Shem Tov's famous interpretation of the verse, "G-d is Your Shadow". And then we move on to a humorous story about Reb Zusha. Together they illustrate the remarkable concept that a person receives help from G-d commensurate with how he acts towards his fellow human beings.

Prayer and Giving Thanks (p.188)
Does G-d need our gratitude?  Yankel the tailor didn't think so but his Rabbi was able to set him straight.  Just as the repeated hammer-blows of the sculptor shape the marble, so too our daily prayers wear away the rough edges of our character. Gradually, we begin to think less of what we lack and more of the blessings we have. Prayers of gratitude open our eyes, enabling us to appreciate the blessings which have been sent into our lives making every day a celebration.

The Power That Replenishes Our Strength (p.191)
We learn about the heroic actions of a brave Jew living under the brutal rule of the Russian Czar and how the puzzling meaning of a line in Baruch Sh'amar finally became clear to him. The theme of this prayer is further illustrated by a story about an inspirational gift from a rabbi's daughter: a T- shirt with a verse taken from a chapter in Isaiah. Lastly, the essential difference between an altruistic atheist and one who believes in G-d clarifies the main idea of this majestic prayer.

Finding G-d in Nature (pp.191-202)
We gain deep insight into the central theme of Pesukei D'Zimrah by looking at an intriguing argument in the Talmud. The Talmud states that: "Whoever says Hallel every day is blaspheming G-d." Rabbi Yose, however, says, "May I be among those who recite Hallel every day."  How could R' Yose say that?! The Talmud's resolution of this apparent contradiction shines a whole new light on Pesukei D'Zimrah. We finish with a statement by Einstein regarding two ways of looking at the world which strikingly mirrors the two positions in the Talmud.

Be Like the Palm Tree (p.192)
"The righteous flourish like the palm tree". Why is the palm tree used in this metaphor? The comparison of the righteous with a particular quality of the palm is apropos in more than one way. Young Shalom Schneersohn (later the 5th Lubavitcher Rebbe) and his brother Zalman played the game of "Rebbe and Chassid."  From a spontaneous remark relating to their game, we get straight to the heart of the palm tree metaphor.

Freud's Kosher Prescription (pp.194-195)
"Trust not in nobles or human benefactors".  The straight forward meaning of this verse is that man is undependable and mortal. Only in G-d can we place our trust. But there is another reading of this verse, wonderfully illustrated by a story about Freud.  A university student once came to him seeking a cure for debilitating headaches. Freud got to the root of the problem and sent him away with a very kosher prescription.

This is My G-d, the Spice and Spirit of Judaism (p.198)
The great Chassidic leader, the Maggid of Mezrich, was once walking through a town when a woman approached him and asked him for a blessing for a child. He told her a story about a beautiful prayer shawl that his mother once gave to a tzaddik under similar circumstances. She thought she understood his meaning, but really misinterpreted the message. The Maggid's intent is revealed in the prayer which the Jews sang at the parting of the Sea and teaches us volumes about how to be inspired Jews.

Nothing but G-dliness (p.199)
The magnificent poem, Nishmat, which closes the Shabbat morning Psalms, expresses the fact that G-d's energy animates all of creation. There is no distinction between matter and spirit. We contrast this with the symbolism behind the famous Renaissance painting, The School of Athens, in which Plato and Aristotle take a very different philosophical approach. This idea is further illustrated with a story of a merchant who penned a profound truth about reality. The Rebbe comments on the merchant's observation, with an explanation of his own, that brings it all together.

Nishmat- The Rebbe and the Repairman (p.200)
A moving story about the Rebbe and a home repairman throws new light on a contradiction at the heart of the Nishmat prayer. The Rebbe illustrates why we should never consider ourselves inadequate and unsuited to the task of serving G-d. Even the most humble amongst us has what is needed. We just need to use the tools we were given, in the best possible way.

Judaism, the Oasis of Community in a Lonely World (p.201)
The Talmud says that when Jews are united, G-d overlooks even serious wrongdoings. The connection between the power of healing and community unity is a concept which is absent in most of the bestselling self-help books. Why? We learn a lesson from the Talmudic story about Rabbi Yochanan's "healing touch" and conclude with an astute observation by a pioneering Jewish sociologist who examines the differences between traditional and contemporary therapies.