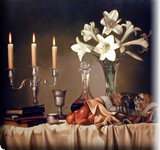 Below is a sample of Shabbat Gems: Kabbalat Shabbat.

Steven Spielberg helped build a wonderful Chabad shul, known as Bais Bezalel, or “Bernie's place,” in Los Angeles on Pico Boulevard. Rabbi Lisbon, the synagogue's Rabbi, asked Spielberg to dedicate the shul in memory of Spielberg's stepfather, Bezalel/Bernie. During the dedication, a young Chabad rabbinical student asked Spielberg, “Share with me some inside secrets of making a movie.”

Spielberg thought for a moment, and said, “You'll notice, it is common in a dramatic scene to gradually build the music to a crescendo, and then: stop-rest-silence. Whatever is spoken on the screen in that silence is heard more clearly and more powerfully. Those words are given an extra potency, because they are spoken out of the silence. When you listen to the music,” Steven continued, “listen to the rhythm of rest.”

Then he gave an example: Think of Martin Luther King’s most famous speech. Listen to the rhythm of the last line of that speech:

“Thank G-d almighty, we are free at last.”

That is Shabbat.Shabbat is the pause and rest in the rhythm of the week.

And just as the words that follow the pause in a movie’s music have extra power, the thoughts, words and deeds that occur during Shabbat have special meaning--they lend life spiritual power and potency.