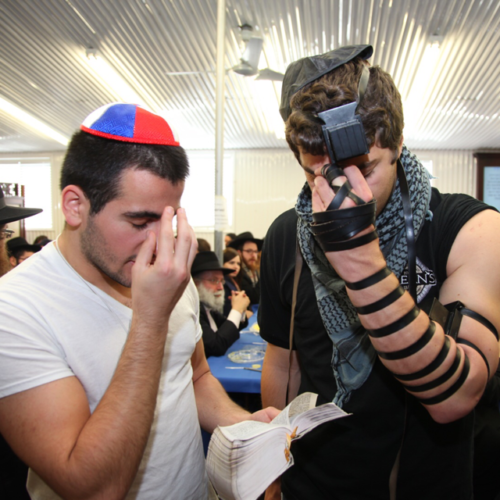 You know that saying, “Don’t sweat the small stuff?” Well, I think we all may have gotten it backwards. Yes, it’s important not to sweat life’s little inconveniences.  But there is also a time to absolutely sweat the small stuff because doing so can and will make a significant difference. Judaism’s greatness is that it takes high ideals and exalted visions – image of G-d, love of neighbor – and turns them into small patterns of behavior, Mitzvot, which give discipline to our lives. It tells us to sweat the small stuff because commitment to gradual, consistent improvement will turn life into a masterpiece.

We can all recall moments of insight when we had a great idea, a glimpse of a project that could change our lives. A week later the thought was forgotten. But the people who change the world, whether in small or epic ways, are those who turn peak experiences into daily deeds, who know that the small details matter.

No matter what you are creating, whether it is your relationships, your health, your finances, or your Judaism, if you want a masterpiece, it will have to be done one tiny act.  Taken together, those tiny individual acts make a massive difference.

Sweat the Small Stuff is a new speech that will give you the tools to teach the importance of the small deeds that make up Jewish life. One of the great psychological blocks that people have is the inability to see the importance of a mitzvah. This speech can change the listeners, giving them a new appreciation for what they may have thought was a dry, symbolic ritual. A puzzling Midrash is solved with the story of a famous sports coach who turned his team around with a counter intuitive methodology. A seemingly incurable disease is banished through small acts. And a study by two Stanford psychologists helps bring to life the secret of Jewish observance.

The speech concludes with a moving story of kindness repaid after decades and across oceans, and a push towards adopting two of the Rebbe's mivtzoim. This year, let us commit to "sweating the small stuff," through which we will transform the brokenness of the world into a Divine masterpiece, one brush stroke at a time.