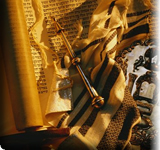 The Echoes of the Torah: How G-d's Revelation Changed the Way Everyone Thinks and Feels

Each year before Shavuos, we find ourselves looking for fresh, new material for the all-nighter and the "Ice Cream" derasha. I've prepared an in-depth class as well as a "speech" that shares the same theme. The class includes real "lomdus" and textual study as well as emotionally rich spiritual lessons. The class is peppered with stories and jokes which help keep the class lively and fun.

I have prepared three PDF's:

PDF #2: Handout for Students (includes 10 pages of readings rendered in Hebrew and English)

PDF #3: Excerpts from the class that can be used as a speech

Below is a brief synopsis of the class.

OVERVIEW: The Echoes of the Torah: How G-d's Revelation Changed the Way Everyone Thinks and Feels

The class opens with Enlightenment philosopher Voltaire's failed prediction about the Torah, and a rabbi's humorous suggestion that the reason that there was thunder and lightning on Sinai was because G-d knew that when Jews hear words of Torah they fall asleep!

Then we move on to the Midrash which offers three interpretations for the description of G-d's voice at Sinai as "a mighty voice that did not cease."

1) G-d's words reverberated in all languages.

2) They reverberated throughout history.

This Midrash became the springboard for a profound meditation of the Rebbe into the very essence of what transpired at Sinai. The first two interpretations, says the Rebbe, obviously point to the universality and timelessness of Torah. But what is "mighty and unceasing" about a voice that was "echo-less"? One could argue that if G-d's voice was so strong, it should have produced a dramatic, thunderous echo!

After exploring the first two interpretations, we will look at the Rebbe's beautiful, stunning and profound answer to that question. We will see how G-d's voice, His influence, did not cease on that Shabbat morning 3,322 years ago, but continues to guide us through our history.

We'll examine the first two facets of G-d's "mighty and unceasing voice" throughout history—it's timelessness and its impact on people of all languages. In doing so, we'll take a fascinating journey, looking at a myriad of profound, funny and moving topics.

We'll explore how the voice at Sinai has changed the moral landscape of mankind – "in many languages with no echo."

We'll learn about an Orthodox rabbi's response to the loss of his child; Monet's twenty paintings and Divine light; a road built in 1963 that helped Israel in 1967; a Jew's clever response when taunted by a priest to eat bacon; Rabbi J.J. Hecht's mischievous comment to a group of affluent Manhattan Jews; why America's revolution succeeded where France and Russia failed; and Benjamin Franklin's suggestion for the Great Seal of the United States.

Kedusha - one of the supreme moments of holiness in Jewish prayer - is constructed from two verses of the mystical visions of Isaiah and Ezekiel. The first verse is from Isaiah: Holy, Holy, Holy, is the Lord of Hosts, the whole world is filled with His glory. The second from Ezekiel: Blessed is the Lord's glory from His place. A fascinating question is inserted between the two verses: 'Where is the place of His glory?'"

We will look at Rashi and Tosafot and the different historic times in which Ezekiel and Isaiah lived and we'll see why we read Ezekiel's prophecy as the Shavuot haftorah; and the meaning of their respective statements that we recite in Kedusha.  We'll also examine the Kabbalah's explanation for the difference between Aramaic and Hebrew.

We will look at one of the greatest symbols of the nation, the Liberty Bell. It was the chiming of this bell from the tower of Independence Hall on July 8, 1776, that summoned citizens to hear the first public reading of the American Declaration of Independence. Around the top of the bell are words taken from the twenty-fifth chapter of Leviticus: "Proclaim liberty throughout the land to all the inhabitants thereof."

When the newly formed American government wished to express the principle of freedom that supports the United States, they turned to our Torah. Why?

We will see how the "mighty and unceasing voice" of Sinai did not restrict itself to Hebrew, but impacted mankind's many languages and thus, the Torah's ideals of liberty, individual dignity, and equality have inspired many nations and echoed thunderously throughout world history.

Finally, the festival of Shavuot this year marks the 250th yahrtzeit of Rabbi Israel Baal Shem Tov founder of the Chassidic movement. The insights he formulated captivated and inspired the Jewish world till this day. What was the secret of his success? We will see that it lay in understanding the third interpretation of the Midrash—that G-d's voice had no echo. This insight will weave everything we have studied together into a beautiful tapestry.