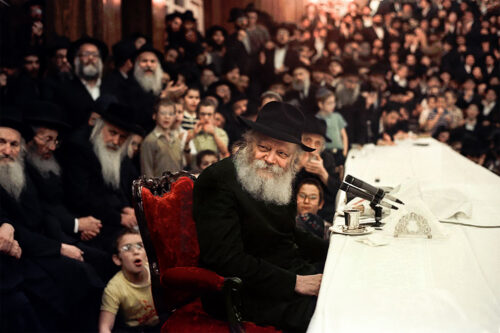 "The Rebbe, and the Rebirth of the Jewish People" The speech celebrates 60 years of the Rebbe's Leadership.

As we mark this momentous 60th anniversary, let us explore the miracle the Rebbe helped create. At the dawn of the Rebbe's leadership in 1950, the Jewish world in Europe, from which he came, had been almost totally obliterated in the Holocaust. America, his new home, was a melting pot that dissolved Jewish identity in its welcoming warmth, like a teaspoon of sugar in hot tea.

Despite the challenges, the Rebbe began spearheading the rebirth of the Jewish people, establishing an astonishing 2,700 Chabad centers. There is no historical precedent for this massive effort to reignite the fire of Judaism in a secular age.

How did the Rebbe do it? Why did he succeed? This inspiring talk looks at key elements that the Rebbe used to set this revolution in motion. The speech analyzes each one of these elements, with fresh perspectives, and moving stories.

We'll gain insight into his approach by learning about a remarkable tradition from ancient Israel recorded in the Talmud. Why was it that when some Jews entered the Bais Hamikdash, they walked through it clockwise, while others were instructed to walk counterclockwise? How did this bolster Jewish community and foster sensitivity? How is this ancient tradition a model for the Chabad House? How is this deep understanding expressed in the Rebbe's brilliant lesson to a depressed man?

And we'll look at why your typical Chabad House may not be a "Chabad" House after all-and hear a remarkable story of a family reunion involving a Shliach in North Carolina, a Shliach in Arizona, a Shliach in California, a Shabbaton in Crown Heights, Brooklyn, and two gutsy college kids.

The prophet Yechezkel had a dramatic vision, in which he saw a valley filled with people who had passed away and then, as he watched, they were revived. "This", G-d tells him, "is symbolic of the coming rebirth of the Jewish people." We'll see how the Talmud questioned this story, asking whether it was only a temporary miracle, or whether those brought back to life would live, love and have descendants.

We'll unravel the Talmudic answer and see how it is another key to the Rebbe's efforts to keep Judaism alive and flourishing, perhaps best expressed by the mitzvah campaigns.

Finally, we'll end with a moving story about Shabbos, the Super Bowl, and how to stand up for what is right-the continued flourishing of the Jewish people.